Before going into any review, just a few remarks on Opening Day, which I was lucky enough to have attended. First things first, what a game. Both teams were out there battling, a pitcher hit two homers, and a “non-hitting” catcher went 3 for 4, including breaking up the Perfect Game and helping to spark a rally in the ninth. Of course, in true D-backs fashion, we won the game with a bloop single in the bottom of the ninth. There were multiple good things to take out of this game, most notably the way the offense looked. Pollock was back and firing, we got contributions off of the bench, and the timely hits were there, except for in the 8th when Jake Lamb and Yasmany Tomás grounded the rally to a stop. That 8th inning had the feeling of so many games last year. You have a rally building through, punch in a run with Paul Goldschmidt, then suddenly a double play and it’s killed. Tomás was absolutely bamboozled by off-speed the entire game, having no semblance of comfort in the box, but where the nugget of hope for change came was in the ninth, via Mr. Jeff Mathis and Mr. Daniel Descalso. Mathis was introduced this offseason, coming in alongside Chris Iannetta as the replacement for Beef Welington. It showed a fairly distinct move in ideology about the catching position, going for more defensive catchers. Daniel Descalso was brought in with the subsequent departure of Phil Gosselin, which received quite a few head scratches at the time. What I got out of it was that they were trying to address the issue of situational hitting that has plagued us in recent years. Descalso last year posted a .368 RISP average. Gosselin hit .178. This move certainly paid off for us in this game, and I think it will continue for the rest of the season, as Descalso develops as a bit of a fan favorite.

In the bullpen, we wound up with seven pitchers: 5 righties and 2 lefties. As far as surprises go, none were particularly shocking, especially with so many of the spots up for contest. Archie Bradley lost out on the fifth spot, sticking him in the ‘pen, but look to see him making some spot starts here and there, and if struggles start to emerge, he seems to be next in line for the rotation. I was pretty happy to see Tom Wilhelmsen on the roster, as he had a good Spring and has some local ties to Tucson, having lived and worked here for a little bit as a bartender. JJ Hoover pushed his way on with a stellar spring. Andrew Chafin and Ranall Delgado were bound to be on there, and the same goes for Fernando Rodney, who I hope turns things around after that misstep on Opening Day, but at least it was a non-save situation, so take it with a grain of salt, if you believe in such things as performances being altered by situation. Sadly, Evan Marshall was claimed off of waivers by the Mariners this week. He started off his D-backs career very promising, putting up a 2.74 ERA in 2014, but he has been rough in the years since after taking a line drive to the head. I know I am wishing him all the best in Seattle.

For the middle infield, I had my write-up pretty close to the end of the Spring Training, so the decisions seemed pretty apparent at that point, and I was correct on Chris Owings and Brandon Drury getting the first looks up the middle. Nick Ahmed proved some worth off the bench in the first game, and hopefully we will see it continue, maybe with him putting up some better hitting numbers. I will continue watching Ketel Marte down at Reno, seeing what sort of season he puts together. I think that should he begin the season hot, we may be seeing him sooner rather than later, especially if Ahmed does not pan out coming off of the bench.

I thoroughly loved going to Opening Day for the second year, and I’m hoping to continue it as a yearly tradition! Here’s a bit of my experience, and here’s hoping for a great season! 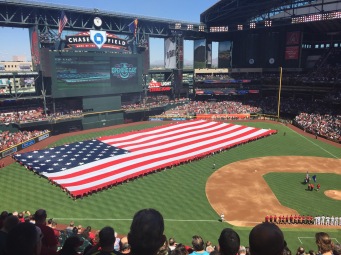 All Stats courtesy of baseball-reference.com.